We are a small group of martial artists dedicated to preserving and promoting authentic Okinawan karate and kobudo, and in particular Shogen-Ryu ti and Yamane Ryu kobudo. Apart from being a martial art with an original purpose of preserving and passing on life protection techniques through the generations, karate is also a cultural treasure of the island of Okinawa.

Sadly, the majority of dojo and groups across Europe and worldwide have resorted to teaching more commercialised sports based competition karate, and the budo aspect of traditional ti has been diluted and neglected. Within Okinawa Shogen-Ryu Karate-Do Europe we have remained true to our principles, and we diligently strive to deepen our knowledge and understanding of Okinawan karate and kobudo. This is achieved through the constant training and study of ti under the guidance of Kiyomasa Maeda, Hanshi, Judan. We are extremely fortunate to have direct contact with Okinawa, and to have direct access to the knowledge and understanding of both karate and kobudo that is unselfishly shared by Maeda, Sensei.

Maeda, Hanshi was passed the responsibility of continuing the preservation and promotion of the Shogen-Ryu system by his teacher Kensei Taba, Hanshi, Judan. Maeda, Sensei appointed Sensei Michael Quinn as the European Kancho in June 2018 with a view to promoting both Shogen-Ryu ti and Yamane Ryu kobudo across Europe. Maeda, Sensei informs that he has no desire to build a large organisation. Rather, he hopes to build a group of karate-ka who are dedicated to preserving and promoting this cultural asset of Okinawa as it was originally intended.

The term “Makoto” was incorporated when naming the dojo as it means “sincerity” or “honesty” in the Japanese language. Michael stresses the importance of being self-aware and honest with both oneself and others as a lack of either value impedes negatively on a student’s progression and martial development. If a teacher or student is unable to reflect upon or acknowledge honestly and sincerely their own personal weaknesses they will be unable to overcome their most formidable opponent, themselves. 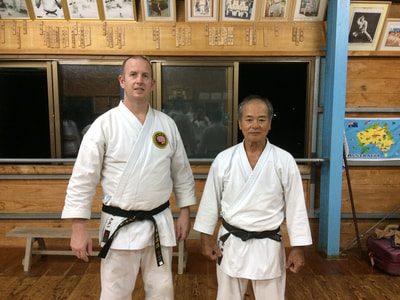 Hear what our Students Say