Karate: Exercise for the Mind and Body 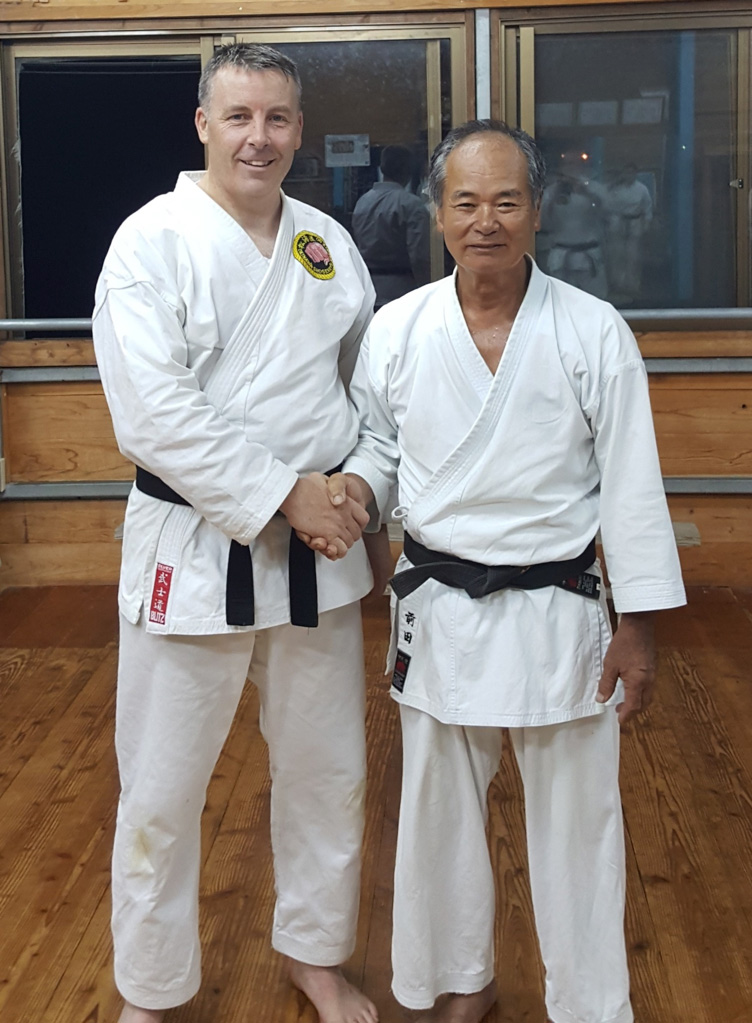 It’s hard to imagine two small island nations that are so far apart yet so similar. The native people of Okinawa and Ireland have so many things in common. It’s easy to understand why we, a small number of Karate-ka here in Donegal, Ireland have forged such a strong bond of friendship and respect with our friends and mentors in Kiyomasa Maeda Sensei’s dojo based in Itoman, Okinawa.

Both race of people, the Irish and Okinawan are renowned for their tenacity. In both cultures respect is encouraged to be shown to others, in particular towards the elderly. We both have a rich cultural history which dates back hundreds of years and of course we are both famous for our welcome throughout the world to one and all.

I, Aiden Thompson, consider myself a very fortunate member of the Shogen-Ryu Makoto Karate Dojo here in Donegal. My teacher, Michael Quinn Sensei has made Karate his life’s passion, which is only surpassed by his devotion to his wife and family. Quinn Sensei has trained in several styles and systems of martial arts for many years, and it was following his research into authentic Okinawan karate that he was introduced to Maeda Sensei, who was the senior student of Kensei Taba Sensei, the founder of Shogen-Ryu.

Following courteous exchanges and having shown a keen interest in authentic Okinawan Karate, Quinn Sensei travelled to Itoman to train with Maeada Sensei. Following that trip Quinn Sensei knew he had finally found the style and true essence of karate that he had craved for so long. Upon his return to Ireland Quinn Sensei devoted his teaching to his newly adopted style of karate, Shogen- Ryu.

I first discovered Shogen-Ryu Karate when I withdrew my daughter from our local Shotokan karate club. My daughter had trained there for two years, but I felt that there was too much emphasis on the competition aspect of this style, and that only the best students were afforded the most amount of tuition and detailed attention. I introduced my daughter to Quinn Sensei who clearly stated from the beginning that Shogen-Ryu karate was not about competition, trophies, or about getting photographs in the local paper. Instead it was a style that emphasised the traditional teaching and application of true Okinawan karate. Each student wears a plain white dogi, shows mutual respect to each other in the dojo and would be rewarded for their commitment and attitude towards their training accordingly. There were no guarantees of rank or hierarchy within the dojo. All students were treated equally. It is with immense pride that I can state my daughter still trains in the dojo, and she is currently training for her senior Shodan test.

I began my journey in karate following a life threatening workplace accident which resulted in a very serious back injury. As a result of this injury I found that I was no longer fit or able to train as I used to. Having formerly served in the military, and then in the Coastguard rescuing those in need, I was used to being active and able to keep relatively fit, strong and flexible. However due to the extent of my injuries simple tasks such as bending over to tie my laces in the morning to walking up stairs caused me excruciating pain and discomfort. I felt like I was effectively an old man trapped in a young man’s body. This injury and the subsequent loss of my job and future employment prospects affected me greatly in a very negative way. In my view, I felt that people respected me because of what I did previously at work, I was my job, that was who or how I saw myself in public. After losing my job, I lost my own sense of worth and purpose. After a very negative and prolonged illness I realized that I needed to reassess my entire life and find a new motivational tool. I needed to start the healing process within my mind and body.

I had watched my daughter train in the dojo for many years and one day, following many days of self doubt and reluctance to embarrass myself, I walked onto the dojo floor and asked Quinn Sensei if I could start training. I believe that this is one of the most difficult steps for all students to take in karate. I could see firsthand the physical, mental and social benefits of this lifestyle and I have tried to immerse myself in it since. For me personally I find that the hours spent on the dojo floor allow me to forget about my physical injuries. We start each class with a stretching routine to lumber up and each student is encouraged to do their own stretches that they require for their own bodies. We also train in our kihons religiously. These basic drills teach us the correct posture to adapt for our style of Karate and help us with body strengthening and conditioning. After these drills we work on kata and their applications. No two nights of training are ever the same lesson and students that show dedication and commitment are put forward for grading having achieved at least 70% attendance and after having shown the correct attitude to learning and to their senior students accordingly.

In June 2017 we were honoured to have Maeda Sensei and two of his senior students come to Ireland to conduct a seminar in Shogen-Ryu Karate. This was a culmination of the hard work and effort of Quinn Sensei, and we had students of karate from differing styles and areas travel to our seminar. All agreed that the system of karate we were training in was very efficient for the practitioner, and once used in the correct manner, very effective.

In 2018, a group of our students travelled to Okinawa to train at the honbu Dojo of Maeda Sensei. From the moment we arrived until we left 12 days later, we were treated very well by our guests. Training was difficult, three of four times per day for at least 2 hours per session. The heat was suffocating in the Okinawan summer, yet we enjoyed the opportunity to learn from and observe what true Okinawan Karate was and how it is taught, not on a commercial scale, rather as an art form that is handed down from master to student. The hard work and commitment shown has paid off.

It was with great honour that some students were in a position to undertake a grading in the Okinawa Karate Kaikan in Naha city at the end of our training as a result of their perseverance and dedication. We sat in awe watching the young Okinawan students complete their grading first and we were extremely honoured and privileged to have Taba Sensei’s daughter present for our grading. I am honoured to have passed my Shodan test that day, and I was presented with my black belt by Maeda Sensei in the Hombu dojo that evening. I am the first student of Quinn Sensei to receive his Shodan grading in Okinawa and I will always remember that day with great pride.

We travelled home with a renewed sense of pride and enthusiasm which I believe still shines to this day. All the students who travelled retained and share as much information and knowledge as they can from their own experience, and we share this willingly with those who care to ask and who show a dedication to their own personal development.

I believe that Shogen-Ryu Karate has taught me how to re-evaluate my life again and learn to accept that things can change and become challenging at times. However it is how we respond, adapt and overcome these challenges that make us who we are. I find Karate teaches me inner calm and encourages me to think about situations in greater detail, not just to react to a dangerous situation. I know I will never be the fastest, strongest or most skilful karate-ka but I’m happy to continue to challenge myself and learn from those around me who have travelled this journey before me. I look forward to many more years of learning and giving back in karate.

This site uses Akismet to reduce spam. Learn how your comment data is processed.