The most vital and essential aspect of karate, the kokoro (heart) has not been stressed enough. The discipline of kokoro (heart) can never be achieved in a single day, but shall be attained only through the graceful manners of daily life and its practical imposition throughout a lifetime
Kensei Taba1991 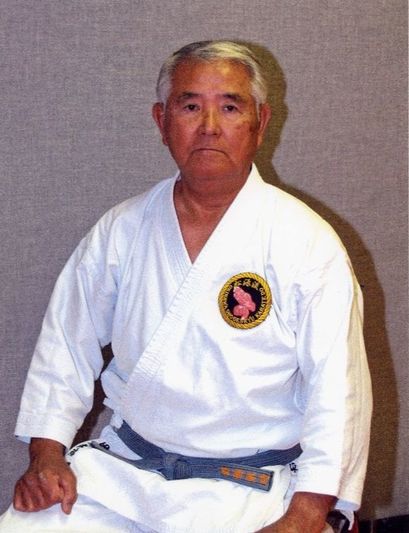 Shogen-Ryu Karate-Do is a Shorin-Ryu system of karate, and it is the creation of Taba Kensei, Hanshi, Judan. It is the product of his more than 60 years of training in Karate-Do under such masters as Shoshin Nagamine, Hohan Soken and Chosin Chibana.

Shogen-Ryu Karate-Do is not another branch or organization of Matsubayashi-Ryu or any other style. It is unique.

The name Shogen Ryu was used by Taba, Sensei to honour his teacher Shoshin Nagamine, and to indicate the intention of returning to the origins or roots of authentic karate. The first part of the name “Sho” represents Shoshin Nagamine while the “gen” means a return to the roots or origins of karate, the predecessor being termed by the older martial arts practitioners as “ti.” In other words Shogen Ryu is a budo system in that it is not a sport but a strong, direct, effective and realistic form of Okinawan karate.

Key aspects of Shogen-Ryu Karate-Do are the use of natural movements, efficiency of movement, a relaxed body and most importantly, the use of koshi, the combination of the hips and lower back when performing techniques. While many people talk about the importance of “koshi” to get maximum power few truly understand the anatomy and bio-mechanical principles involved. It is not an exaggerated movement of the hips but a small and often imperceivable “snap” which provides incredible power to techniques. Taba Sensei had an unquestionable understanding of koshi and incorporated it into Shogen-Ryu karate. The result is a perfect blending of tradition and science which is carried on by Maeda Sensei and his students.

Taba Sensei created a system in which knowledge comes first and egos and politics are not important. Rank is earned and respected, not casually handed out and boasted. Titles, such as Shihan, Renshi, Kyoshi and Hanshi, are only used in written form as is grammatically correct in the Japanese language, and instructors are addressed as “Sensei” regardless of what title they hold. In addition, everyone wears a plain white dogi with the association crest and Dan ranks wear a simple blackbelt with their name and “Shogen-Ryu” embroidered on the ends.

No colorful uniforms with multiple patches or fancy colored or patterned belts are worn. The simple blackbelt a student receives as a Shodan could be the same belt they wear 30 years later. 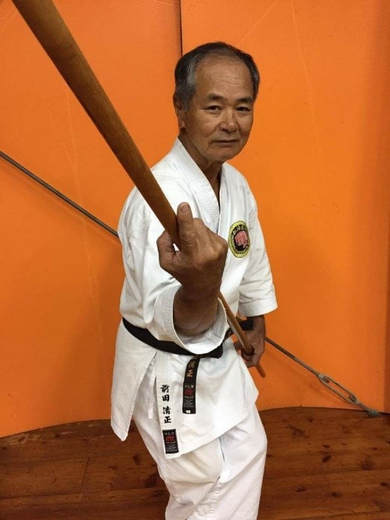 Kiyomasa Maeda, Hanshi Judan is the President of the Okinawa Shogen-Ryu Karate-Do Association.

Maeda, Sensei is dedicated to continuing the teachings of his teacher, and he places much emphasis on the proper hip motion (koshi), muscle relaxation, body structure and mechanics

Maeda, Sensei’s dojo is based in Itoman City, Okinawa, Japan. It is a busy and enthusiastic dojo where students are taught both karate and Yamane Ryu kobudo.

He has also trained under Chogi Kishaba, Sensei in Yamane Ryu Kobudo, a system in which he holds the rank of 9th Dan.

Maeda, Sensei is a highly respected karate and kobudo teacher not only on Okinawa but around the world. He is a member of the Okinawa Karate and Kobudo Rengokai which is a group of the most senior karate and kobudo practitioners from Okinawa.

Maeda, Sensei is particular about who he has as a student, and he will not accept every person who approaches him seeking tuition. He advises that being of kind heart, courteous and dedicated are some of the main qualities he needs to see before he will accept a student for training. Maeda, Sensei advises that anyone who trains in either Okinawan karate or kobudo must prove themselves as being a responsible and trustworthy person who will not use their training to intentionally harm others.

Watching Maeda, Sensei practice either karate or kobudo is an awesome and motivating experience. He generates fast and explosive power using koshi and relaxation which is combined with a fearsome focus.

Maeda, Sensei traveled to Ireland in June 2017 to teach a seminar hosted by Okinawa Shogen-Ryu Karate-Do Ireland. He brought two of his senior Okinawan students with him, Chikara Shinjo and Toshihiko Tamashiro. This was Maeda, Sensei’s first trip to either Ireland or Europe. There are plans for his return to Ireland for a further seminar in the very near future.

We are very proud to have Kiyomasa Maeda, Sensei as our teacher and to have a direct and credible link with Okinawa. 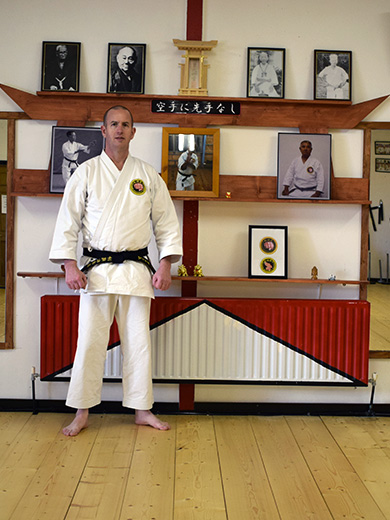 Michael Quinn is a direct student of Kiyomasa Maeda, Hanshi and runs the only Shibu dojo currently in Ireland or Europe. He was the first to introduce the Shogen-Ryu style to Ireland.

Michael travels to Okinawa annually to train at the hombu dojo in Itoman City Okinawa. He studies the Shogen Ryu karate system as passed on from Kensei Taba, Hanshi and Yamane Ryu kobudo under Maeda, Sensei’s tutelage.

After having previously studied various shorin ryu systems including Matsubayashi Ryu, he became deeply disillusioned by the detrimental impact that egos, politics, dubious ranking and negativity was having on karate, particularly within the western karate population. He noticed that there was a marked lack of knowledge within some schools which were claiming various lineages, and rank was being used as a form of currency to maintain and attract students. Michael knew that this was not the karate he was seeking or had read about during research.

He made the decision to travel to Okinawa to seek out a skilled, knowledgeable and principled teacher. He was introduced to Kiyomasa Maeda, Hanshi through Tony Partlow who had been a student of the late Kensei Taba

Acceptance into the Maeda dojo was not immediate. Michael needed to show the Okinawan seniors that he was truly motivated and dedicated to his training and study, and this was reflected in the effort he invested both during and outside of classes.

In the Makoto Shogen-Ryu Karate Dojo there is an emphasis placed on training kihon and then kata. If a student attains a high skill in executing kihon this will be reflected in their kata.

Rank is not given out easily. All students must evidence their motivation, dedication, knowledge, skill, and have a comprehensive grasp of the principles of Shogen-Ryu before they will be deemed eligible to grade. If you are prepared to invest the time and energy, and you genuinely wish to study authentic Okinawan karate and kobudo, then this is the correct dojo for you to train in.